Decoding the STABLE Act and its effects in crypto products, dApps and digitized assets

If you are offering a crypto-based product to your customers, or if you are planning to do so, you should learn about the Stable Act, a regulation recently passed by the US Congress, and its effect on dApps, crypto products, and digitized assets.

In a previous article, we learned how to crate a stablecoin and different aspects related to stablecoin issuance. A stablecoin is a cryptocoin that is resistant to the market value fluctuations. Its value pegged to fiat currencies or physical commodities.  From merely $5.3 billion in January 2020, the overall market capitalization of the stablecoin market skyrocketed to  $22 billion within one year (January 2021). As you can see in the trend graph below, the general acceptance of stablecoins are showing great results. 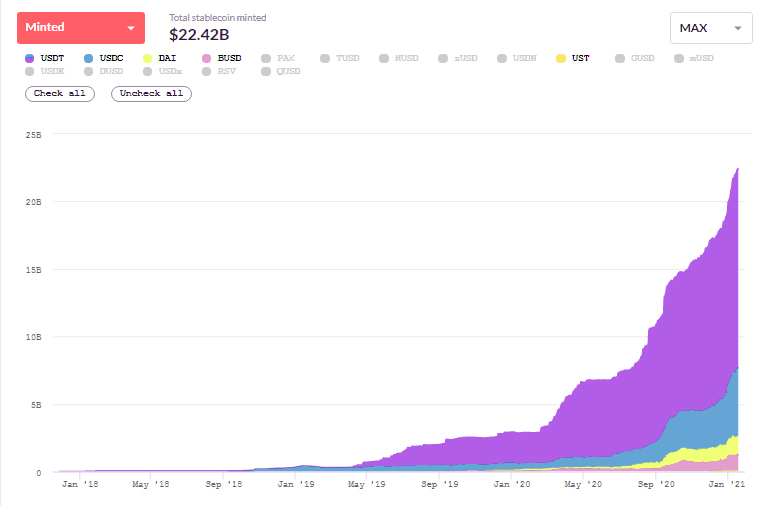 In this scenarion, a new bill was proposed by the US Congress to regulate organizations that issue stablecoins- the STABLE Act. Unlike the OCC (Office of the Comptroller of the Currency) guidance, which was about directing crypto custody to banking institutions, which got a good acceptance, the STABLE Act has provoked the crypto community. So, let’s decode the Stable Act in detail –

What is the STABLE Act?

The Stablecoin Tethering and Bank Licensing Enforcement, or in short, the STABLE Act, is a bill passed by the US Congress aiming to regulate the stablecoin activities by shifting them into the regulated banking framework. It was proposed by three U.S. congressional representatives headed by Rep. Rashida Tlaib. According to her:

Preventing cryptocurrency providers from repeating the crimes against low- and moderate-income residents of color traditional big banks have is critically important.

This Newly-proposed legislation has four specific obligations to abided by the companies offering stablecoins. The prospective stable-coin issuer needs to:

The act affirms that ‘cryptocurrency should not [be] beyond the reach of fair lending laws and regulation.’ But, the majority of the crypto community believes this regulation can affect the potential of digital currency growth in the United States.

Why the crypto community is against STABLE Act?

The bill has welcomed many criticisms from all the crypto community all across the globe. Kristin Smith, Executive Director of the Blockchain Association, stated:

“While we have had sustained and constructive discussions with Rep. Tlaib’s office on this issue, we disagree with the perspective of this legislation and oppose this bill. It would strengthen the position of the most powerful financial institutions while overlooking two core promises of decentralized networks: the chance to put more power in the hands of individual consumers and to catalyze innovation across payments and other financial services.”

Jeremy Allaire, the CEO of the Circle, said that the bill “would represent a huge step backward” by stating that it is an unfair and non-inclusive delivery of payments that comes from stablecoins. But there were some positive responses too.

Rohan Grey, Assistant professor at the Willamette University College of Law  who was also a consultant for the bill, commented:

Why is Stablecoins a regulatory target?

Therefore,  as the number of issuing companies increases, the stablecoin market is expected to grow rapidly. This can result in an inevitable collapse of this digital currency in the near future. In order to avoid this citation, there is a need for strict rules and regulations, making stablecoins a regulatory target.

STABLE Act and its effect on running a crypto node

As per the provision of the STABLE act every stable coin issuing company needs to obtain a banking charter, prohibiting the commercial activity. It is focused on covering smart-contract-issued stablecoins like Dai. This means that node operators or anyone running the software that validates stablecoin smart contracts will violate the law unless they are a chartered bank. Let’s move to the most crucial question.

What will be the effect of this act on crypto products, dApps, digitized assets?

This regulation can hinder future innovations, especially crypto products, with numerous limitations that come with it. Implementing a STABLE Act will be difficult, especially on stablecoins, cryptocurrencies, and other dApps (decentralized applications), especially on obtaining a banking charter since a stablecoin ecosystem includes decentralized blockchains such as Ethereum, which has no central ownership.

And when it comes to digital assets associated with the stable coin, we expect the regulatory board to address how digital assets will fit within this STABLE Act framework.

We will discuss the various implications of this new legislature, which is considered to be a ‘simple extension of the shadow banking system.’

The STABLE Act focuses on fairly new and small stablecoin issuers like startups rather than big players, since it concentrates only on liabilities that are defined as stablecoins. It does not cover any liabilities held by non-bank dollar-denominated liabilities out. Plus, as we saw earlier, no stablecoin issuers currently have a bank license, and if the bill passes, they will be in jeopardy.

Also, the cost, time, and effort required to implement this regulation, in addition to the already existing legislation, can affect the growth of stablecoins in the coming future.

The STABLE Act will affect the value, growth, and innovation of stablecoins in the future. The STABLE Act is not on stablecoin licensure, as stable coins are properly subjected to an array of regulations that make them less volatile and more reliable. It is more like a  blockchain node licensure.

Another point to be noted here the crypto community is raising genuine concerns on the Stable Act right. According to them, these half-baked regulations are affecting future innovations in the blockchain space.

As we know, legislation is never perfect at first; let’s wait for its implementation. Ultimately, what we can hope for is the introduction of new community-friendly stable coin regulations, which can eliminate the misuse of this valuable digital currency—ones that the community can adapt to without any more regulations stocked upon them.

Start working on your crypto project by collaborating with our team!