What are Semi-Fungible Tokens and How is it different from NFT?

In the ever-developing space of blockchain technology, the latest improvement is a Semi-Fungible Token (SFT). Coming in as a development on the foundation of Non-Fungible Tokens, SFTs allow swapping like a fungible token but once it’s redeemed or traded it turns non-fungible. Since the NFT ecosystem is on a steady rise these innovations around the space are an interesting step into the future.

NonFungible’s data showed NFT sales surged to over $2.4 billion in the first quarter of 2021– 20 times more than the previous three months. That momentum so far is steady in the second half of the year, with the leading Ethereum-based NFT marketplace, OpenSea, experiencing a record high trading volume of $49 million, up from its average daily average trading volume of $8.3 million.

What is a Semi-Fungible Token?

Semi-Fungible Tokens (SFTs) can be traded as both fungible and non-fungible. It can hold a fungible value which can be traded with another SFT of the same value. Once traded or the token is “redeemed” then the token loses its value and becomes non-fungible. This can be explained by taking a concert ticket as an example. Two tickets of the same price, concert date, seat, etc can be exchanged but after the exchange, the tickets then become a collectible and thus an NFT. This transfer from fungible to non-fungible contributes to its name.

What makes SFTs different from the existing crypto tokens?

To understand that let’s have a look at some of the basics:

What are Fungible Tokens?

Let’s start by defining fungible tokens. These are tokens that can be interchanged or swapped with other tokens without losing value for either token. Most cryptocurrencies like Bitcoin that are regularly traded are fungible. This means that it can be traded with other tokens of the same value. Fiat currency is another example of a fungible asset. They can be traded to the same type without loss or change in value.

What are Non-Fungible Tokens?

Non-fungible tokens or NFTs are tokens that represent digital ownership. This means that the token represents a rare collectible or a one-of-a-kind piece like an artwork. The tokens thus can’t be exchanged for another since many factors contribute to their value. The trade between the tokens will lead to a loss in value. Ownership of an NFT rests with one person and this is verifiable since the tokens are stored on a public blockchain.

Related detailed article on What are Non- Fungible Tokens? 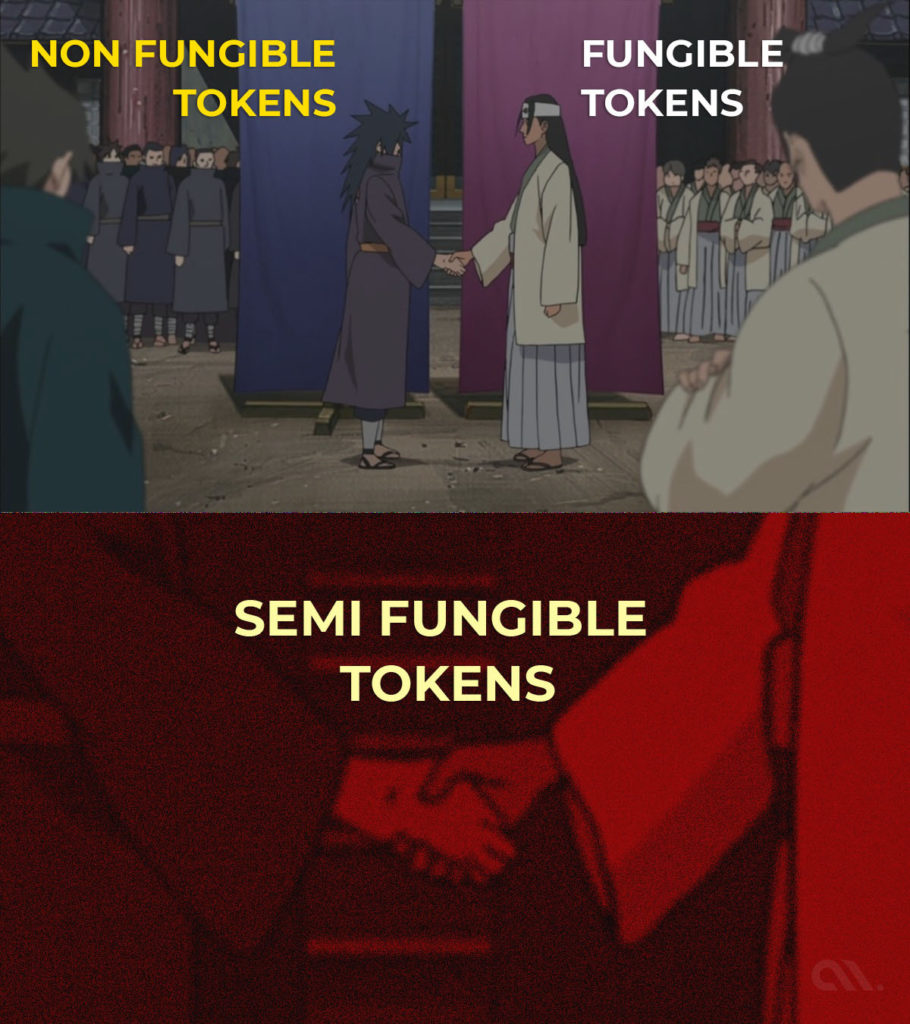 Now let’s move on to the creation of an SFT.

How to create an SFT?

SFTs can be minted with ETH 1155 tokens. In 2017, the blockchain game developers Enjin, The Sandbox, and Horizon Games created the standard and developed it with a combination of ETH 20 and ETH 721 tokens, this allows the creation and management of the token with a single smart contract. This is unlike an NFT where every new transaction needs a different contract. The creation of this token is optimal for the gaming industry since the transactions are often with fungible tokens.

Related article on How to create a NFT token

Can I get an SFT on a Binance Smart Chain?

MocktailSwap Finance has become the first to run the ETH 1155 SFT standard token on Binance Smart Chain. Semi-Fungible tokens bring the feature to Mocktail it means that, unlike NFT where only one address can own one token, this allows multiple addresses to own one token or one address to own multiple copies of the same token. As Mocktail uses BSC this provides higher transaction speed and lower transaction costs.

Though it’ll take time for semi-fungible tokens to fill the shoes of NFTs, the trend is certainly gaining popularity, especially within the gaming industry because of its versatile nature as both fungible and then later a non-fungible token.

Rahul A R is a technologist and full-stack developer who specializes in Blockchain technologies and Cryptocurrencies. Though he’s ... Read more