What is Initial Dex Offering or IDO? The benefits of IDO fundraising

Initial DEX offering or IDO is a new fundraising model that offers better liquidity of crypto assets, faster, open, and fair trading. IDO model is the successor of fundraising models such as ICO, STO, and IEO.

Before we learn about IDO crypto, let’s brush up on our knowledge on the fundraising concept via token sales. If a company wants to raise funds to build new products or expand its business, it has multiple options. The traditional option is to go for financial loans or investments from banks and VCs.

However, since the success of cryptocurrencies – Bitcoin, and Ethereum, more companies had used it as an instrument for raising funds via token sales. Here, the company would create crypto tokens and issue them to the general public in exchange for Bitcoin, Ethereum, other major cryptocurrencies, and fiat currencies. This process is called fundraising via token issuance.

There are different methods to do token sales, namely Initial Coin Offering or ICO, Security token offering or STO, Initial Exchange offering or IEO, and the latest method – Initial Dex Offering or IDO. In this article, we’ll discuss about IDO. If you’d like to read more on ICO, STO and IEO you can refer this article – How to launch an ICO, STO, or IEO

Here, we’ll help you gain better insights into the below topics:

What is an Initial Dex Offering (IDO)?

In an IDO, the IDO coin is issued via decentralized liquidity exchanges, such as Uniswap, Bancor, or Binance. The first ever IDO was hosted by Binance DEX. According to them, this fundraising method enables protocols available for traders without being controlled by others. Also, since IDO can be self-organized by anyone, it does not bear any assurance or guarantee as the issuer controls the event. IDO is gaining popularity as more businesses are considering it for fundraising. 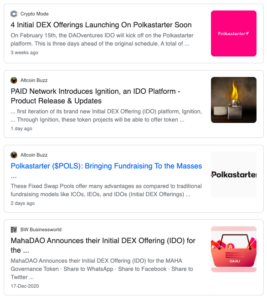 Difference between Crypto IDO and IEO/ICO/STO

So, what makes it different from earlier fundraising methods in the crypto space?

In ICO’s case, which is the same as an initial public offering (IPO) process, the issuers manage all the responsibilities. In contrast, in IEO, it is done by a centralized exchange host. When we compare IDO with the other two approaches, we can see that it is basically a combination of both ICO and IEO. The only difference is that IDO replaces the centralized exchange (CEX) with a decentralized one (DEX).

In the case of Security Token Offering  (STO), the investment contract is backed by the security token. STO deals with assets that offers monetary profits. Plus, STO complies with the government regulations, whereas in the latter, regulations are yet to be framed.

Initial Exchange Offering (IEO) and IDO are almost the same; we can even call IDO the new IEO. In both approaches, the organizations can directly exchange the tokens to individual investors or traders. But in IDO, you don’t have to pay an exchange fee as you pay in IEO since it is self-organized and decentralized. Moreover, IDO solves some of the problems associated with IEO such as, in most cases, issuers are not allowed to list token with competing exchanges. Issuers also need to pay a sizeable token stack or paying a vast sum to list the token in an exchange. Moreover. Issures are not able to control the parameters of fundraising

As we already discussed as a brainchild of Binance, the first IDO was on Raven Protocol. The Raven protocol is actually a distributed and deep-learning training protocol for providing cost-efficient, faster deep neural networks training. It was listed on June 17, 2019, and held for 24 hours. A total of 3% of the token supply was assigned, and the value of each Raven token went up to 0.00005 BNB.

Another example of IDO was the UMA protocol, an Ethereum-based platform for issuing and trading synthetic assets. Recently a decentralized autonomous organization, MahaDAO, announced that they are going to launch IDO for MAHA, which is their governance token. According to issuers, this token regulates the world’s first non-depreciating cryptocurrency ARTH.

What are the benefits of the IDO model?

Usually, it is observed that in the token offerings method, as soon as the token sale goes public, private investors buy a large number of tokens for a lesser price. They will resell these tokens to the general public gaining a huge profit. With the IDO fundraising approach, companies, especially startups, don’t need a centralized exchange and permission to kickoff the fundraising event. Also, anyone can organize or participate in IDO, not just private investors.

Another benefit of IDO is that the IDO coin can be traded immediately. This way, investors can buy their tokens quickly when it is launched and resell them at a higher price later during the IDO.  For example, during the UMA protocol fundraising, the initial token price of $0.26 immediately jumped to just around $2.

As per proper definition, liquidity means the ability to buy or sell easily on the market. Or, in simple terms, how quickly you can get your hands on your cash. Here in the IDO, the project’s token gets access to immediate liquidity, which can benefit the token price.

How to launch an IDO?

According to Binance DEX, an IDO crypto issuance can be organized by the token issuer completely independently. It can be carried out either offline with the project’s own IT system or online on the blockchain via transactions from the issuer itself.

What are the problems with the IDO model?

Now it’s time to see the issues with this new fundraising model.

Messari, a leading Crypto research firm says on their Twitter handle that initial event shows IDO is a reincarnation of initial coin offerings (ICO) and warns average investors to learn how to “avoid getting dumped” by analyzing supply schedules and understanding crowd mentality.

What’s the future of the IDO model?

The Initial Dex Offering (IDO) approach has been introduced to address the issues with its predecessor’s ICO, STO, and IEO to an extend. With its decentralized exchange model, where there is no need for permission to organize the fundraising event, it does work to raise funds.

However, at the same time, it leaves loopholes that whales and scammers can exploit, affect the token issuers with issues like immediate price movement.

Of course, Initial Dex Offering (IDO) is the next step of crypto fundraising. But it needs a lot of work to be done. Like it is important to integrate control mechanisms into the existing IDO model. This can help in eliminating variations in token prices until the fundraising has finished. Also, by making use of  KYC regulations, issuers can gain more control over who’s buying how many tokens.

Kick start your crypto project by collaborating with our team!