Over the last couple of years, Blockchain has increasingly become more popular as more than just a platform for cryptocurrencies. It now promises to revolutionize many domains ranging from healthcare to banking. What makes this technology stand out is the unparalleled level of transparency and decentralization it facilitates. This, along with its ability to maintain an incorruptible ledger onto which data can be recorded, makes it the technology of choice for various applications across domains. As widespread as its influence is, we’ve only begun to explore the myriad applications of this technology. One potential application of blockchain is addressing an issue concerning humankind since time immemorial – CORRUPTION.

A shocking statistic reported by Forbes magazine in 2017, was that of bribery adding up to a staggering US$ 1 trillion worldwide annually. In fact, corruption was reported to be one of the root causes of the economic recession in 2008.

Conventionally, bills, invoices, and other transaction documents are maintained either in the physical form or digital form for bookkeeping and auditing purposes. These are prone to tampering since verifying the authenticity of the documents can be highly time consuming and cumbersome process and is usually overlooked. Let’s suppose a government is constructing a bridge, using taxpayers’ money. If someone wanted to evaluate the spending to see how wisely and efficiently the funds are managed, they can request for the details and they would see a bunch of bills and vouchers for the various transactions. What’s the problem then? The party(ies) issuing the invoice or bill can easily manipulate it or create fraudulent ones altogether. The person(s) requesting to see these documents will choose to trust that the records they are presented with are accurate at face value without verification since that is a tedious process. This tendency of human nature is something that many corrupt officials exploit for their own personal gains, not just in government sector but this potential use of technology can save many sectors as following from corruption,

Do you know blockchain can make your business procurement processes fraud-free?

When the Commonwealth Games was conducted in India in 2010, it was considered a matter of national pride. However, the allegations of corruption and the investigations that followed left a permanent black mark. It is estimated that out of the 700 million INR allocated for the Games, only half of it was spent on the infrastructure and sportspersons. This is not an isolated incident either. Corruption has seeped into every imaginable sector across the globe. Initiatives such as the Right to Information Act implemented in India are a step in the right direction to bring in more transparency in the functioning of government bodies, but requesting information through those channels is like pulling teeth with all the tedious document verification and red tape. Those processes need to be simplified.

The only way to eliminate corruption is by giving power to the participants at the lower level, to the one who pays. By providing the investor with an entirely transparent and trustworthy account of how the money is used. Blockchain technology can help you do that. Let’s take a look at the diagram below, which depicts a blockchain based system for managing the fund allocations and spend management through crypto tokens. 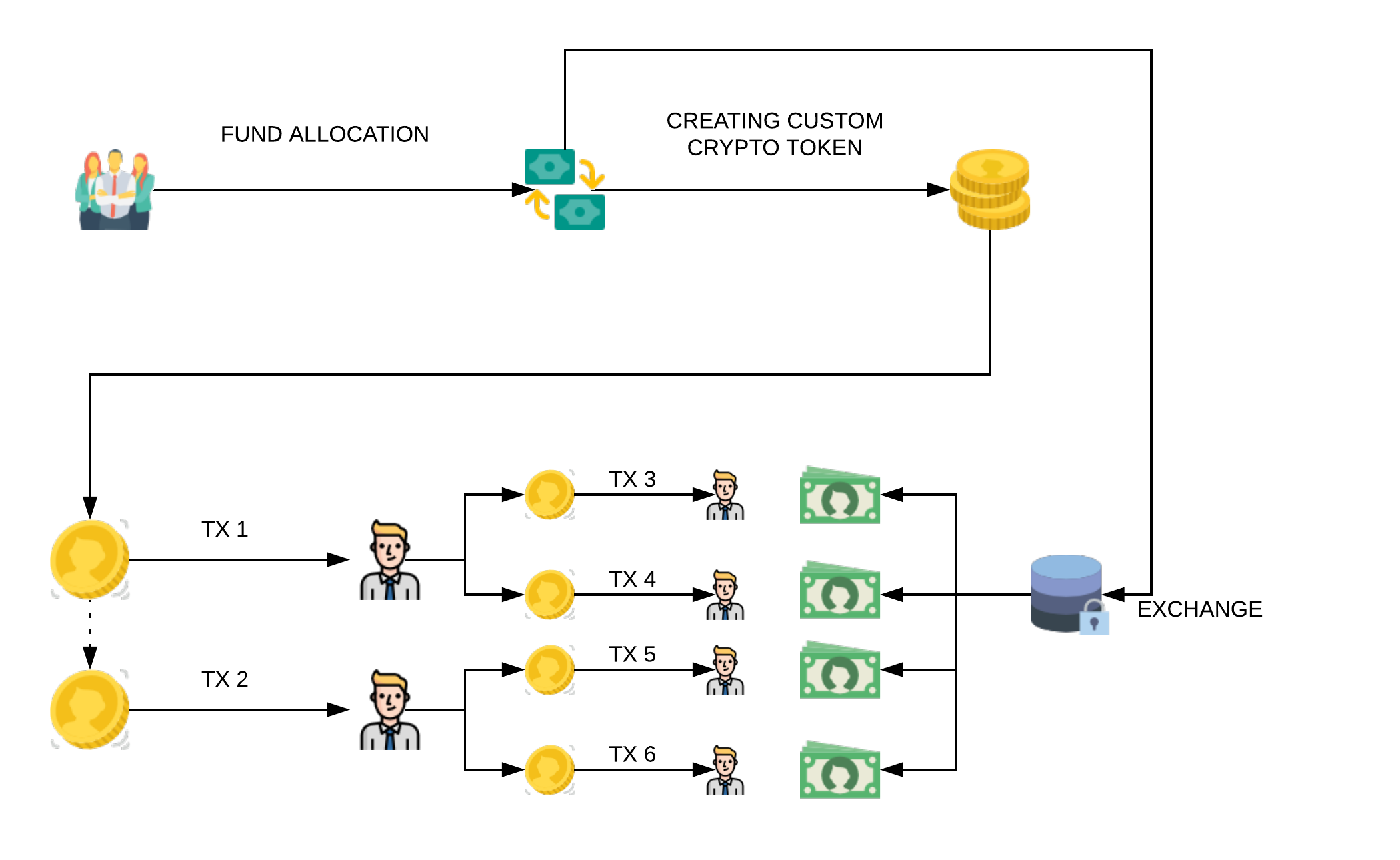 The process depicted in the diagram above can be summarised in five steps,

When a new project is approved and fund is allocated for it, Fund issuer creates a new custom crypto token and made ready to be issued to the participants

Issuer can transfer the crypto token equivalent to the amount that needs to be transferred to a recipient, this will be recorded as a transaction in the Blockchain network

The recipient can transfer the crypto token to another participant/recipient or they can convert the custom token to fiat currency via the token exchange.

Let’s consider the Commonwealth Games scam mentioned earlier. With Blockchain, we can create a system to record all transactions in a time-stamped ledger. This ledger would be accessible only to those who are authorized. Any additions or changes made to the records will be time-stamped and version-controlled and visible to all on the Blockchain. If anyone wishes, the activities on the blockchain can be traced from one end to the other and assess if the transactions are valid. For example, any purchase of equipment for the Games arena can be authenticated and validated by analyzing the invoice ID and checking if the vendor wallet address is genuine.

Such a blockchain-based system would allow any organization or government body to launch a custom token to manage the funds of any new project. Each transaction can be verified on the blockchain by users with the requisite access key. Besides, the technology relies on decentralized storage, wherein all records are maintained across multiple systems across the network also ensure that the records are virtually tamperproof. This is only just a bare-bones take on what can be achieved using this revolutionary technology and how it can help make our lives better by ridding us of the menace of corruption.

The effective implementation of a blockchain-based system would require a complete shakedown of the existing systems across organizations and would need to be a coordinated effort by all parties involved. Corruption is a social evil that we have learned to live with. But it is an evil that has to be vanquished. We have the technology to make it possible now. A word of caution though; it would be extremely hard to implement this system in a corrupt society as it would have affected even the highest levels. However, being optimistic, let’s hope that, in the not too distant future, a corruption free world will be a reality with blockchain playing a pivotal role in ushering in winds of change across industries worldwide.

Reach out to us today to know more about this technology use case.

Aharsh is a tech entrepreneur, a visionary. He believes that each of us is here to do something purposeful, ... Read more