Temporary work visas are the favorite of IT companies, especially for those companies from Silicon Valley, including tech giants like Apple and Google. These visas enable companies to bring in skilled foreign nationals to work for them. However, based on a recent executive order signed by US President Donald Trump, H-1B, H-2B, and a few categories of J and L visas are suspended for the rest of this year. The news turned out to be quite unsettling for the IT sector, Google, Twitter, and many other companies criticized the unfortunate move by the president. 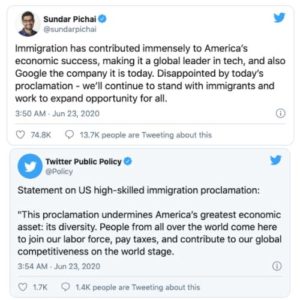 Sanctions on work visas are getting more frequent and the visa landscape itself is becoming increasingly unreliable for IT companies in the US. US-based IT companies heavily relied on non-immigrant employees since they are financially beneficial as well as bring in other benefits such as cultural diversity, better global market understanding, etc. However, the visa freeze, combined with the economic downturn is raising bigger challenges to the IT sector.

The impact of visa freeze during the economic recession

The year 2020 forced companies worldwide to experiment with new models of operations. The COVID19 pandemic has forced companies to let the majority of its employees work from home. Followed by the economic recession, companies were forced to reduce the business running costs in whatever ways possible. However, the visa freeze would force these companies to hire local professionals, that’d shoot up their salary expenses drastically.

Since the option of bringing in non-immigrant professionals is off the charts, the demand for US-based professionals would increase. All tech giants and tier 1 companies would start large scale hiring of local professionals. But the supply of qualified local professionals is only limited and the demand is rising. The payscale would also increase for these skilled professionals. MSMEs, SMEs and Startups won’t be able to afford hiring tier 1 professionals who are extremely talented, especially since they are already hit with the economic recession and they’ll have to hire tier 2 professionals at a high cost to get the job done. So, the need of the hour is an affordable workaround for businesses to meet their demand for skilled workers. And that’s why the concept of ‘managed remote hire’ becomes increasingly relevant today.

What is Managed Remote Hire?

Managed remote hires is a model evolved from different conventional project outsourcing models. It brings together the best and eliminates the demerits of outsourcing IT projects. In conventional project outsourcing, company A outsources a project to company B. This model has some drawbacks such as vulnerable project security, accountability, etc. Here, Company A and Company B are 2 different entities and some level of friction arises during the project development, delivery because of the cultural communication gap between the two companies.

In the managed remote hire model, company A hires a remote team from company B and makes the remote team an integral part of company A for the short or long term. Company A would manage the remote team from company B so that the cultural and communication gaps are eliminated for the seamless engagement and successful project development. The comparison table below shows why managed remote hire is the best choice for businesses,

Among the three models compared in the table above, clearly, managed remote hire is the best choice for businesses, as it offers the best from all options and at the same time helps the company to reduce the operations costs.

How to hire a remote team effectively with managed remote hire?

Company selection & Things to look for


The objective is to find the team that has the expertise needed for developing the project and ability to sync with the hiring company’s culture. Search online for offshore development companies who have the right technology capabilities you are looking for. Check the company’s reviews, case studies, clients, and portfolio in online business catalogs such as Clutch, Goodfirms, etc. You can do a primary evaluation right from their online presence. After shortlisting a few potential companies, conduct face-to-face interviews, and review their work’s code structures, documentation, company values, management tools they use, etc, to get an understanding of who can better adapt to your requirements.


It is essential to draft a detailed Non-Disclosure Agreement (NDA) and Non-Compete Agreement (NCA) that’d make the business relationship more secure. NDA is a standard measure that protects the intellectual property of customers. The NDA is signed by the company, as a whole along with the developers who will be able to access the code/technology, which ensures double protection. NCA prohibits the outsourced organization from disclosing your ideas or innovations to your rivals. The concept is that you can’t become partners with your client’s potential competitor for a specific amount of time as an agency or a developer. The non-compete agreement is aimed towards preventing outsourced employees from terminating employment with an employer and taking a new position, with a competitor, where they can make use of any confidential information acquired from the previous job.


Once the contracts are signed, the hired team would be treated as an integral team of the hiring company. They’d take part in the company’s cultural activities and other events as long as the contract exists. This would empower the remote team to better align with the hiring company and be more productive with their work. The hiring company would assign a manager for each remote team, who would bridge the gap between both ends. A manager can be responsible for multiple remote teams. In today’s world, it doesn’t matter if your vendor is right across the street or halfway around the world. If you’re using the right communication tools, remote team management can be seamless. For smaller teams, Skype is sufficient, but for large teams, more sophisticated tools like Slack, Zoom, etc can be used. Proper documentation of the project is essential to ensure the success of the project and to avoid any misunderstandings that can happen at different stages of the project. Atlassian’s Confluence is a great documentation tool. Other free alternatives include Gitlab and Google drive. These tools allow users to capture project requirements, assign tasks to specific users, and manage several calendars at once.


Ensuring project development quality and project security is one of the main factors that determine the success of managed remote hires.  For a majority of companies, source code theft is the main concern that restrains them from outsourcing IT projects. However, for what it’s worth, source code theft should be the least concern for the company, because it can be easily solved if you are hiring managed remote teams. By using Virtual Private Networks (VPNs), Virtual Machines (VMs), and version control software, we can set up a work environment that is secure from source code theft. Here, the remote team’s developers code on virtual machines connected via VPNs. This ensures that source code is not moved to any unauthorized destinations. In the virtual machine, it is possible to restrict websites, apps, etc and enable only the essential services required by the developer to build the application. Moreover, all updates in the application can be managed via a version control software so that the company would be able to precisely identify updates to the code from each developer. The next step is to properly define the source code access control. Using the access control modules in VMs, and version control software, it is possible to restrict access to a developer if they do not need to use certain parts of the code. Using a ‘Least Privilege model’ it is possible to monitor who accesses the source code. To ensure the work quality of the remote team, audit the source code by your own Quality Analysis (QA) team or an external QA team. A sound QA team would be able to benchmark the performance of the source code, find out if any backdoors are created in source code intentionally or unintentionally, find out security vulnerabilities in the source code, etc. A good QA analyst can help to verify the maturity and maintainability of the code while making sure that the software is prepared for a smooth transition. Moreover, make sure to add clauses in the contract regarding the quality of the work delivery.

The concept of managed remote hire is very different from project outsourcing. The relationship between the hiring company and the hired team doesn’t end after the project completion. For the hiring company, it’s more like the remote team went for a vacation, they don’t have to pay salaries but would still include them in occasional cultural activities or events. Both ends would keep in touch with each other so that if the hiring company needs further development support in the future, they can hire the same team with a notice period.

The hurdles brought by the economic recession and the visa ban have led to a hard time for IT companies. Especially lower-tier companies and startups. By embracing managed remote hire, they can mitigate the problem and meet the demands for qualified professionals without increasing operations cost.

Get in touch with us for a no-obligation consultation.

Aharsh is a tech entrepreneur, a visionary. He believes that each of us is here to do something purposeful, ... Read more