If you’re planning to launch an ICO, STO, or IEO in 2021, you should know, the processes involved in launching these campaigns have evolved from how it was done for the past couple of years. In a nutshell, ICO, STO, and IEO encompass different methods to raise funds through a token offering. Unfortunately, the regulatory hurdles associated with these fundraising methods are constantly changing, and businesses need to make an effort to keep up. In this article, we will take a look at the differences and similarities between ICOs, STOs, and IEOs and insights on how to launch them.

So far, it’s two weeks down the road in 2021, and we can see positive market signals in the crypto space. The value of bitcoin has hit record growth, reaching $42,000 and most of the prominent cryptocurrencies and altcoins are bullish. ICO market had a boom during late 2017 and early 2018 when the market signals were similar to what we see today. With the growing demand for altcoins and investments in crypto assets, we can expect 2021 to be a great year for ICOs, STOs, and IEOs. The image below shows the 24hrs performance of altcoins today. 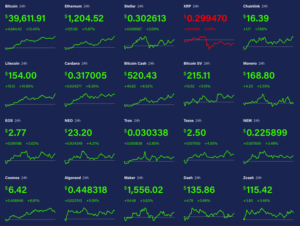 Securing the capital required for starting a new project can be difficult, especially since the outbreak of the COVID-19 pandemic in 2020. This is why non-traditional forms of fundraising like ICO, STO, and IEO are gaining more popularity. These methods can often help businesses secure large amounts of money. Before we delve deeper into how to launch your own fundraising campaign, let us first take a look at how they are different from each other.

What is an ICO?

ICO or Initial Coin Offering refers to a form of crowdfunding via crypto tokens. It was one of the first methods that gained popularity after the rise of crypto, and many startups have used it to navigate around the strict rules that an initial investment process needs to follow. The basic necessity for the launch of an ICO is a website with the wallet address to which cryptocurrencies are sent. It was characterized by no legal boundaries, no investor protection, complete anonymity, and often the lack of MVP.

Any individual or company can fund any project or become an investor. It usually works through the issuance of digital coins against investments. Even though initially the investments were made via cryptocurrencies such as Bitcoin and Ethereum, the ICO processes evolved and started accepting fiat currencies as well. Investors buy the offered token which servers as a utility in the proposed project.

Benefits of launching an ICO:

The aim behind launching an ICO and IEO is usually the same. Essentially, it is to provide tokens to a large group of investors. However, there is one major difference. IEOs are launched and managed by an existing exchange instead of the organization that created the token. The exchange holds and sells the token on behalf of the project team. As the exchange platform sells tokens, token issuers pay a listing fee along with the percentage of tokens sold during the Initial Exchange Offering. In turn, tokens are presented on the platform and listed after the end of IEO.

Benefits of launching an IEO:

STO stands for Security Token Offering. You can think of STO as a regulated ICO. They deal only with security tokens, unlike ICO.  A security token can offer profits to the investor rather than a utility. STOs need to be compliant with several government regulations. Security Tokens are classified as securities, so they are bound by the securities regulations of the country they’re operating in. In STO, security tokens are developed by real-time assets and contain all the ownership information. It provides high security to investors and reduces the risk of token issuers.

Benefits of launching an STO

Similarities in ICO, IEO, and STO

ICO, IEO, and STO are all methods being used by startups to gather funding for the commercialization of innovative technological ideas. All three of them mostly deal with intangible assets. To begin the launch of an ICO, IEO, or STO, a company must prepare a white paper — a document that contains information about the project’s objectives, its implementation technology, the required amount of funding, the number of tokens that the project founders will have at their disposal, as well as how long the campaign will last.

Now that we have a better idea about what these terms mean and how they are similar to each other, let us take a look at what the primary differences between them are:

STOs must comply with various strict regulations. Therefore, it takes a significant amount of time to resolve all the legal requirements, without which the company will not receive permission to conduct a crowd sale. On the other hand, the launch of an ICO and IEO does not require much time if a ready-made project idea is well presented in the White Paper, and a smart contract has been created. ICO offers the least time to go to the market.

Launching an ICO provides you the flexibility to offer your token with the budget you have. The main expense in launching and ICO is on the marketing side, which can be tuned up or down based on your budget. For an IEO, the basic necessity is to meet the listing fees demand of the exchanges. And for STOs, you need to deal with the legal fees involved in the different filings and registrations.

STO is strictly governed by regulations. On the other hand, no law obliges an ICO to provide legal documents supporting a coin offering. The white paper has all the information relevant to the project, which is not mandatory either.  IEO token issuers do not have to worry about the crowd sale security and regulations, as the exchange manages the smart contract. The KYC/AML process is also handled by the exchange, as most service providers do KYC / AML for their customers after creating their accounts.

Irrespective of whether you choose an ICO, STO, or IEO, you will have to undergo some legal checks. These checks can vary greatly depending on the type of fundraising approach that you have chosen. For example, a majority of the exchanges that are offering IEO launchpads will want to verify whether your token is actually a utility token among other checks.

In the US, you may have to verify whether your cryptocurrency is a security under federal securities law. In order to do this, you will need to put it through the Howey test. Howey test is used to determine whether a crypto token should be considered as a security or not.  A token is considered as a security if it involves an investment of money (not just buying) and offers profit expectations. Generally, the primary issue in evaluating a digital asset under the test is whether a buyer is expecting to gain a profit out of the transaction. However, acquiring a profit is just one aspect of security. For more information on this test, you can read our article, Howey Test: What it means for Digital Assets and Cryptocurrencies?

Preparing a project for an ICO, STO, or IEO launch can be a harrowing experience if you don’t know what you are doing. Before launching, there are a few prerequisites and requirements that you will need to fulfill. At first, you will have to conduct extensive research on the crypto market. Understanding your target audience will also help develop your project in the best possible manner. Once you have finalized your project idea, begin to check the economical, financial, and social feasibility of the idea. Tons of ICOs has been launched so far. So, chances are not slim that an ICO very similar to your project idea has been already launched. Websites like Coindesk, ICOdrops, etc lists past ICOs. 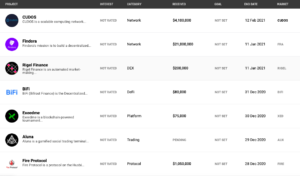 You can check for ICOs related to your domain or industry and see how that particular ICO has performed. You’ll get an idea of the market acceptance of projects in your industry and based on the insights you get, you can decide on the marketing activities you need to focus on.

Once you have developed and verified the feasibility of your idea, it is time to begin execution. In order to do this, you will have to put together a reliable team of experts who are familiar with blockchain technology and crowdfunding approaches. They will be able to help you develop a sound technological roadmap that will outline the phases in your project and minimize the risks associated with it. Based on the data you gather at this phase, you can start preparing a whitepaper.

Drafting the whitepaper is one of the most important steps during the launching process. A good whitepaper can help your investors understand your project and make an informed decision about it. The white paper should explain your project’s purpose and answer questions a potential investor may have. Writing a whitepaper for an STO and IEO is very similar to that of an ICO. You can read our article on how to prepare your ICO whitepaper to get a better idea of how to go about this step.

Once you have drafted your paper, it is time to select your fundraising approach. There are pros and cons to each method, as discussed at the beginning of this article. Make a decision about whether you would like to launch an ICO, STO, or IEO based on your business requirements. In order to ensure a smooth launch, hire your own legal advisors who can give you concrete legal information about the state of your token.

On completion of these steps, you are ready to begin executing your campaign. Launching an ICO, STO or IEO can be an extremely complex and challenging task. If you require any help during the process, reach out to us and our experts can help you out.

Ditto is an IT executive with hands on experience in Software Development, Software Architecture Development, Business Development Management, Corporate Management, Project Management, Implementation, and Strategy. Always a step ahead in adopting the latest trends and solutions that are beneficial for the organization and general public. Strives to develop and come up with ideas with the aim of improving the livelihoods of others.